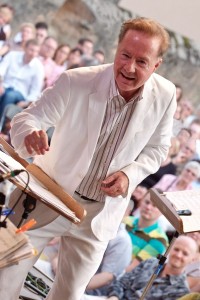 In his long and successful career as a musician, Wolfgang Diefenbach has worked with renowned orchestras, international soloists and important jazz composers and arrangers such as Bill Holmann, Manny Albam, John Clayton, Bob Mintzer, Jerry van Rooyen, Bill Dobbins, Ray Brown, Bob Florence, Steve Gray and many others. Under the professional direction of Wolfgang Diefenbach, highly talented young musicians as well as selected prize winners of the “Jugend jazzt” competition have been given the opportunity to perform as members of the State Youth Jazz Orchestra Hesse – Kicks & Sticks for more than three decades and to develop their skills further. Diefenbach’s successful teaching concept combines regular workshop sessions with well-known instructors, concerts and stage appearances at jazz festivals with famous soloists, and international tours. Top-class recordings and numerous TV and radio productions document Wolfgang Diefenbach’s diversity, his high standards and his selection of musical partners. He succeeded in winning star saxophonist and composer Bob Mintzer to write Pots & Pans exclusively for the band — a title that the orchestra has played all over the world by now. Pots & Pans can not only be found on the first CD Kicks and Sticks, which won the German Record Critics’ Award, it is also on the Happy Birthday CD, featuring Bob Mintzer himself as the soloist. In addition to his intensive commitment to young jazz musicians, the experienced band-leader is also dedicated to directing jazz vocal ensembles, and to creating large-scale crossover concert projects, which he has performed in major concert halls on all continents and in nearly all European countries. With “Crossover Xmas”, he presented a broadly diversified crossover program of high-class music with a 200-strong choir and international guest stars, including of course the Hesse Kicks & Sticks! www.wolfgangdiefenbach.de