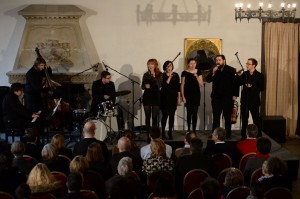 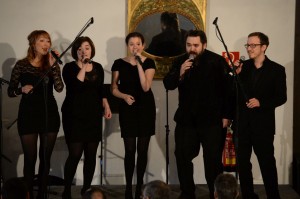 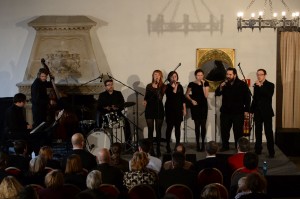 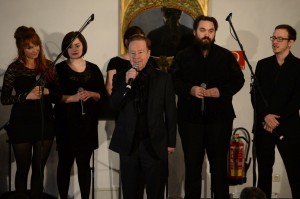 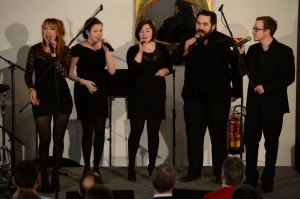 To kick off Kicks & Sticks‘s anniversary year, five young singers of the Kicks & Sticks Voices, supported by a jazz trio taken from the Hessen State Youth Jazz Orchestra (Kicks & Sticks), provided the music at a brunch concert in the five-star Schloss Reinhartshausen Kempinski, on the banks of the River Main 15km east of Rüdesheim. This concert, which took place in the historic wine-pressing room, was one of the winter series organized by the Rheingau Musik Festival to showcase young up-and-coming musicians whose talent shows that they have a great future ahead of them. Under Wolfgang Diefenbach’s baton, they sang swing classics from the Great American Songbook as well as rousing Latin jazz, songs in pop style and songs that they had brought with them from their recent tour of South Africa. The singers were accompanied by piano, bass and drums, giving them an intimate, club-like sound.

The German radio station hr2 broadcast as part of the series „Der Sound der Freiheit – 70 Jahre Jazz in Hessen“ [“The Sound of Freedom – 70 Years of Jazz in Hessen”] a portrait of Kicks & Sticks over the last 30 years.