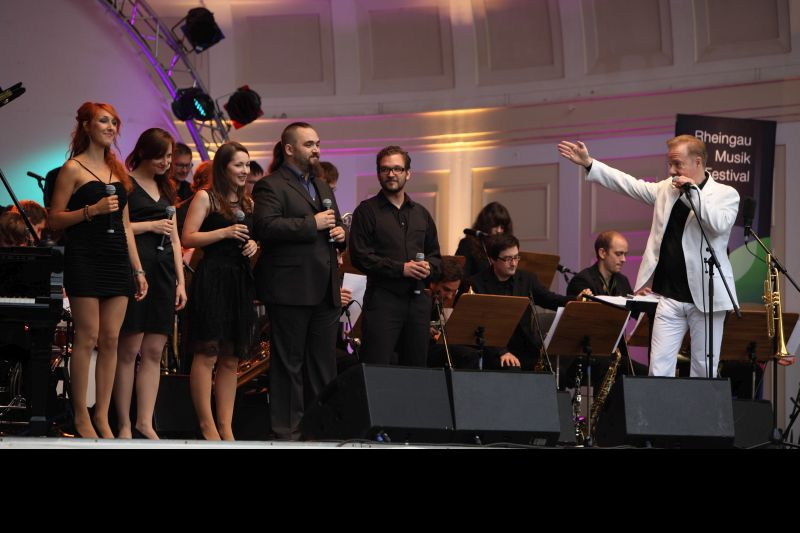 The jazz vocal ensemble Kicks & Sticks Voices brings together versatile, expressive personalities. After just a few intensive workshop sessions and a masterclass with the singers of the New York Voices — one of the top international vocal jazz ensembles — the young discoveries were ready to show everything that’s possible with a voice. Their high level of ability, incredible intensity and precision, fine sense of light and shade and their rousing scat are impressive.

The latest project from Wolfgang Diefenbach’s stable galloped straight into the recording studio: Wolfgang directed the Hessen State Youth Jazz Orchestra together with the Kicks & Sticks Voices for the new CD, “Didn’t We”. The new vocal group brings a welcome breath of fresh air to the genre; you can hear it on the disk. Uniquely for this recording, Darmon Meader, the head of the New York Voices, made the American group’s exclusive arrangements available, after they had performed together with the Kicks & Sticks Voices in the Germany Rheingau Musik Festival. And so you can hear Louis Prima’s swing classic “Sing, Sing, Sing” and Stevie Wonder’s hit “Don’t You Worry ‘Bout a Thing” in exclusive Meader arrangements. Together with the Hessen State Youth Jazz Orchestra, the Kicks & Sticks Voices represented the German state of Hessen and local German culture when they toured China, including a visit to Hessen’s twin province Hunan, and also in South Africa, where they performed in Cape Town and in the Johannesburg “Joy of Jazz Festival”.

The enthusiastic vocal talents of Kicks & Sticks Voices display their ability to sing styles apart from swing, for example with sentimental samba ballads and scintillating Latin jazz. And all that in characteristic big-band style! Under the direction of Wolfgang Diefenbach, the young singers and jazz musicians present not only ardent and sensitive arrangements of outstanding swing classics from the Great American Songbook, but also pop sounds and stirring Latin jazz. A full-bodied sound, an eclectic repertoire and much more besides: the variety of styles emphatically prove the creative potential of Kicks & Sticks and their band-leader. In combination with the polyphony and enormous spectrum of the vocal group, which sings in combinations ranging from quartet to sextet, Wolfgang Diefenbach not only adds even more dynamic potential  and a new sound to the band, he celebrates a genuine revival of the big-band vocal group. And it sounds so fresh that you could believe swing is contemporary music.