Everything a Big-Band Needs

EVERYTHING A BIG-BAND NEEDS 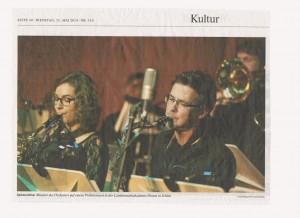 The Hessen State Youth Jazz Orchestra presents a new programme.
And now it even has vocal ensembles.

Looking back through the proud and fruitful history of the Hessen State Youth Jazz Orchestra, it’s necessary to point out its ability to survive difficult times, made possible by its founder Wolfgang Diefenbach, who studied classical conducting and is an enthusiastic tenor-saxophonist and flautist. His easy-going nature when leading his fellow musicians and his perfectionism, together with his policy of choosing repertoire driven by inquisitive searching for new material but also by high educational standards and his talent for organisation that appears almost casual have kept the big-band at the top of the league of comparable European youth orchestras. The trajectory of the big-band, which by its very nature has a constant turnover of musicians (upper age-limit 24), is marked by celebrated tours around the globe, for example to Australia and China, prizes and recordings. The orchestra is financed by the Hessen State Ministry for Science and Art (based in Wiesbaden), and it also has a very loyal sponsor.

In recent years, Diefenbach has made two dreams come true: the first was to form a younger band, called the “Junior Band”, which has no lower age limit but has at its upper end the natural transition to the concert big-band “Hessen State Youth Jazz Orchestra” […]. The other dream, which took even longer to bring to fruition, was the founding of a vocal ensemble. For almost half a century, Diefenbach had collected stacks of scores from the great role-models such as the New York Voices, Take Six, Manhattan Transfer and the Swedish Real Group in his cellar.

However, there were, and still are, not many singers in Germany who are up to this very difficult task, and so it was a long time until Diefenbach came to a double result. Four years ago he founded the two ensembles “Voices” and “Junior Voices”. During a tour that included a performance in the Rheingau Music Festival, the New York Voices, whilst they were being accompanied by the [Hessen State Youth Jazz Orchestra] big-band, got to know the “Voices” and were so impressed that they swapped singers with the “Voices” and also donated their scores free of charge.

Twice a year everybody meets for ten days at a nice location with suitable accommodation and rehearsal rooms — after 25 years in Wetzlar this was, for the fourth time, the Hessen State Music Academy in Schlitz. This opportunity is used to rehearse and perform the repertoire for the coming months. Diefenbach is assisted in the courses and individual sessions by a varied troop of prominent musicians: to name just a few, the globe-trotting American who has played in numerous big-bands Michael Philip Mossman, the equally prestigious Dutchman Jan Wessels and the impressive instrumentalists American trombonist Joe Gallardo, Dutch trumpeter Jan Oosthof and German tenor-saxophonist Johannes Enders. Several of them conducted their own compositions and arrangements in the concluding concert.

The appearances of the various ensembles form an impressive show of ability. The programme is based on the great big-band era, from Count Basie via Woody Herman and Maria Schneider up to the modern representatives of the mainstream such as Bill Holman and Bob Mintzer, whereby “great” doesn’t necessarily refer to the quantity but rather to a favourable reception by the international public. “You Don’t Know What Love Is”, “Li’l Darlin’”, “Satin Doll” and Charlie Parker’s “Ornithology” are a few of the titles that the Junior Band plays with power and precision. The orchestra has so many members that several of them have to be swapped after each piece, so that all of them have their chance on-stage. The improvisations are gaily self-assured, but of course not yet reaching up to the stratosphere.

And then comes the actual Hessen State Youth Jazz Orchestra, also known as “Kicks & Sticks”, named after a piece by Frank Runhof, which is the only repertory piece in the programme; the orchestra learnt the remaining nine pieces specially for this concert. Fire, precision, huge dynamic contrasts, room-filling beauty of sound — it’s all there, at the highest professional level, only a hair’s breadth from the radio stations’ big-bands. Of course, the orchestra cannot compete with the radio big-bands’ top star soloists, but it’s certainly not to be confused with a band of stiff-fingered hobby musicians. The drummer Dominik Raab and the tenor saxophonist Benedikt Koch could very well belong to the 35% of the orchestra that traditionally take up a professional music career. The vocal group “Kicks & Sticks Voices” shines with its clean intonation, its revelry in its own sound, its diverse programme and the luxury of having two outstanding soloists, Maren Kips and Jasmine Klewinghaus, who have everything that the world of entertainment loves: quality, presence, stage talent — and quite simply a beautiful voice.

What the Papers Say