Dianne Reeves and the LJJO at the Rheingau Musik Festival 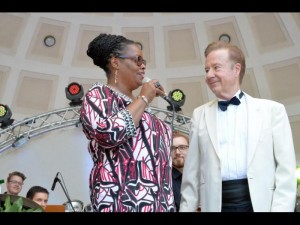 WIESBADEN — An enthusiastic jazz star, the big Kicks & Sticks family and a bunch of birthdays. The Hessen State Youth Jazz Orchestra celebrated its 30th anniversary on Sunday morning in the sun-drenched park of the German spa city of Wiesbaden with an outstanding concert. Centre stage: World-famous star Dianne Reeves, who is rumoured to have shed a few tears of joy — and at the end was rewarded with standing ovations.

In between, after Benny Goodman’s “Sing, Sing, Sing”, Wolfgang Diefenbach also had to wipe his eyes: there was a heartfelt, very personal “Happy Birthday” for the founder, arranger, band-leader and Übervater of the LJJO — improvised by the Kicks & Sticks Voices together with the orchestra and the primadonna of jazz, whom he had spoken to on the big-band’s trip to South Africa.

So there she is in the bandstand with all her heart and full of soul, celebrating Wolfgang Diefenbach’s birthday and the anniversary of his life’s work. A terrific occasion for everybody. Not least for the public sitting in the park. Because Dianne Reeves is grooving — and so is life. Dianne, who has just been decorated with the title of Honorary Doctor of Music by the New York Juillard School, scooped up her fifth Grammy “Best Vocal Jazz Album” of the year for her album “Beautiful Life”.

The Grand Dame, born in 1956 in Detroit, shows us that these accolades are not without good reason: Diane Reeves — that’s not only breath-taking virtuosity, improvisation technique, wild scats and an amazingly variable timbre but also impressive charisma. When she comes onto the stage after the Kicks & Sticks warmup, with the  Cuban hip-swinging “Horn of Puente” and the “Smack Dab in the Middle” intermezzo from the Voices, we experience  presence in its purest form. And perhaps the best footnote of the day: there’s not a trace of a temperamental prima donna. On the contrary.

The Power of Youth

This performance is the climax of her year says the lady, who otherwise never sings with youth orchestras, and rhapsodises unashamedly about how much the spirit and energy of the young musicians have touched her. Then she performs a magnificently decelerated version of the Fleetwood Mac/Stevie Nicks hit “Dreams” — and despite the tropical temperature you can’t help getting gooseflesh. Diane Reeves is verily an experience. No matter whether crooning Sarah Vaughan’s melancholic bar number “After Hours” into the microphone or paying joyful hommage to the legendary Betty Carter: every song is a declaration of love to music — and to her audience.

That continues unchanged in the second half of the concert, which Kicks & Sticks opens with a scorching version of Phil Collins’s “Sussudio”, before Miss Reeves (accompanied at the piano by Mads Baerentzen) performs the classic ballad “In a Sentimental Mood” and Michel Legrand’s “Windmills Of Your Mind” as a cornucopia of emotion. And finally “Satiated”, a brilliant duet in which she pulls out all the stops, and which she had recorded for her “Beautiful Life” album with Gregory Porter. Her partner in Wiesbaden: Another big bearded bear of a tenor: Christopher Klassen of the Kicks & Sticks Voices — with standing ovations. Which we can only endorse.

Translation of an article that appeared in the Wiesbadener Kurier on 3rd August 2015. With kind permission.